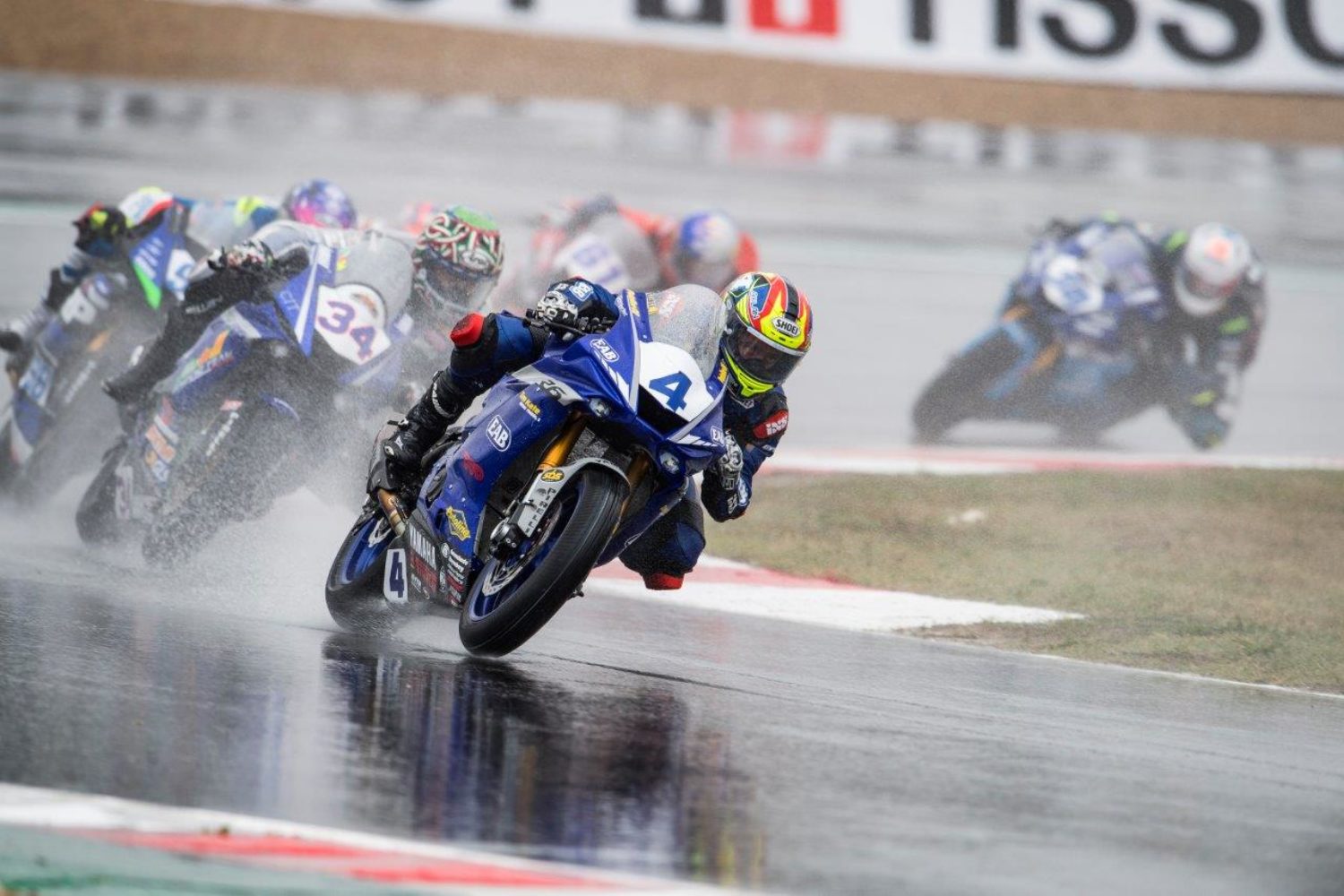 Steven Odendaal has scored a wonderful 4th place in today’s WorldSSP race at a wet and cold Circuit de Nevers Magny-Cours. The start of Steven was brilliant as he gained 10 places from 15th on the grid in the first lap and was on a provisional podium place a lap later before he had a massive moment and almost crashed out of the race. As a result of this, he lost his 3rd place but thanks to a strong recovery at the end, Steven finished the race in 4th. A superb end to a tricky weekend in France for EAB Ten Kate Racing.

Steven started the weekend very promising as he was in 4th place after his first ever session at Magny-Cours and maintained his strong classification in the wet afternoon session despite a crash in Turn 7 halfway Free Practice 2. Also, Victor Rodriguez impressed by his first visit to Magny-Cours and was in 4th after WorldSSP300 Free Practice 1 on Friday afternoon – after a delay because of heavy rain in the morning. During Free Practice 2 he was in a superb 3rd place for a long time, before he finished his second session in France in a promising 6th place.

Expectations were high for EAB Ten Kate Racing on Saturday but Superpole turned out to be a tricky session for Steven (15th in the WorldSSP) and Victor (26th in the WorldSSP300). An unexpected disappointment, but with two races scheduled for both World Championship classes, everything was still possible.

Heavy rain and standing water on the circuit didn’t made life easier for Steven in WorldSSP Race 1 on Saturday afternoon. But despite minimal visibility, Steven was able to made up a lot of ground in the first lap – as he did today – and was in a strong 9th place when he crossed start-finish for the first time, before he lost a couple of positions as the race progressed. Thanks to an impressive last part – as he did today again – Steven was in 12th place before the race was red flagged with one lap to go.

Also, during the Saturday race of the WorldSSP300, conditions were bad. Unfortunately, Victor’s race was over before it almost started as he had a very nasty highsider in the first corner. The race was red flagged immediately as Victor needed medical assistance, but as by a miracle he escaped from serious injuries although he was declared unfit for Sunday’s race.

EAB Ten Kate Racing team manager Kervin Bos: ‘We are very happy with the positive end to this weekend at Magny-Cours. Steven’s first lap was impressive, and the rest of the race was good too. His result shows that we had a very good race pace this weekend. Also, Victor was on the pace this weekend, but he had a massive crash yesterday. It is a big relief that Victor is pretty oké and hopefully he will be fit again for Estoril in two weeks’ time.’